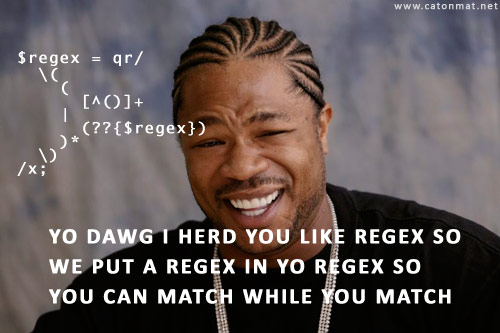 One of the classical problems that a regular expression can't match is the language 0n1n, i.e., a string with a number of zeroes followed by an equal number of ones. Surprisingly, using the lazy regular subexpressions this problem becomes tractable!

Here is a Perl regular expression that matches 0n1n:

Now let's look at the Yo Dawg regular expression in the picture above. Can you guess what it does? It matches a fully parenthesized expression such as (foo(bar())baz) or balanced parentheses ((()()())()).

Here is how to think about this regular expression. For an expression to be fully parenthesized, it has to start with an open paren, so we match it (point (1) in the regex). It also has to end with close paren, so we match a close paren at the end (point (7)). Now we have to think what can be in-between the parens? Well, we can either have some text that is neither an open paren or closed paren (point (3)) OR we can have another fully parenthesized expression! (point (5)). And all this may be repeated either zero times (point (6)) to match the smallest fully parenthesized expression () or more times to match a more complex expression.

Without the /x flag (that allows multiline regexes), it can be written more compactly:

But please don't use these regular expressions in production as they are too cryptic. Use Text::Balanced or Regexp::Common Perl modules.

And finally, in Perl 5.10 you can use recursive capture buffers instead of lazy code subexpressions to achieve the same result.

Here is a regular expression that matches 0n1n and uses the recursive capture buffer syntax (?N):

You can try to rewrite the regular expression that matches balanced parens as an exercise.

Read more articles →
Thanks for reading my post. If you enjoyed it and would like to receive my posts automatically, you can subscribe to new posts via rss feed or email.
50 ideas for the new catonmat.net website
MIT Linear Algebra, Lecture 3: Matrix Multiplication and Inverse Matrices