Perl One-Liners has been published by No Starch Press 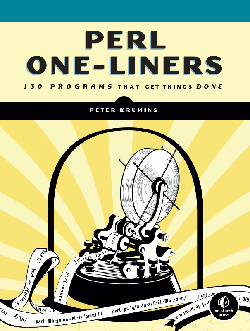 Buy from No Starch Press Use discount code CATONMAT for 30% off! Also available at: Amazon Amazon Kindle O'Reilly Powell's Barnes and Noble

In Perl One-Liners, I take you through more than 100 compelling one-liners that do all sorts of handy and geeky things, such as manipulate line spacing, tally column values in a table, and get a list of users on a system. This cookbook of useful, customizable, and fun scripts will even help hone your Perl coding skills, as I dissect the code to give you a deeper understanding of the language.

What are Perl One-Liners?

Perl one-liners are small and awesome Perl programs that fit in a single line of code. They do one thing really well—like changing line spacing, numbering lines, performing calculations, converting and substituting text, deleting and printing specific lines, parsing logs, editing files in-place, calculating statistics, carrying out system administration tasks, or updating a bunch of files at once. Perl one-liners will make you a shell warrior: what took you minutes (or even hours) to solve will now take you only seconds!

Let's take a look at several Perl one-liners to see how short and powerful they are. All these one-liners are explained in greater detail in the book.

This one-liner generates and prints a random eight-character password. It uses the list range operator .. to produce all alphabet letters from a to z (for a total of 26 letters). Then a random letter is chosen by rand 26 and this operation is repeated 8 times to produce an eight-letter password.

Sum numbers in each line

This one-liner uses the sum function from the List::Util module that comes with Perl. The -a command line argument enables the automatic splitting of the current line into fields in the code>@F</code array. The splitting happens on whitespace characters by default. The -l argument ensures that print outputs a newline at the end of each line. The -n argument makes sure every line is processed. Finally, sum @F sums all the elements in the code>@F</code array, and print prints the result followed by a newline (which I added with the -l argument).

This one-liner uses the binary flip-flop operator ... The operator is bistable, and it works just like the line-range (comma) operator in sed, awk, and various text editors. Its value is false as long as its left operand is false. Once the left operand is true, the range operator is true until the right operand is true, after which the range operator becomes false again. As a result, this bistable operator becomes true at line 17, stays true until the 30 line, and then becomes and remains false. Combining the flip-flop operator with print if condition makes it print only lines 17 to 30.

Finding all lines in a file that appear more than once

This one-liner repeats the letter "a" 1024 times, creating 1KB of data. Operator x is the repetition operator. This one-liner is handy when you need to generate a specific amount of data for debugging or other tasks.

As you can see, knowing how to write one-liners is very useful. Through the years, it's been one of my top priority tasks to become very efficient in the shell. Literally every day when I'm programming, I've to do all kinds of data processing tasks, changing files, verifying output, doing quick calculations, parsing data, etc. Knowing Perl one-liners makes it really fast to get things done and be really productive. With Perl One-Liners you can now become very efficient at these tasks, too!

"By reading this book and trying the recipes, you’ll master shortly all the command-line options that can turn the Perl interpreter into a sed-awk-grep-toolboox-on-steroids."
—Alexis Sukrieh, creator of Perl Dancer (Read More)

“One of the slogans used by Perl is ‘Easy things should be easy and hard things should be possible.’ This book illustrates just how easy things can be—and how much can be done with so little code.”
—David Precious, contributor to the Perl Dancer project and various CPAN modules

“A great reference for when you want to do something with Perl without spending an hour or two trying to figure out how.”
—Sandra Henry-Stocker, IT World (Read More)

“By reading this book you can make a step toward becoming the local computer wizard, even without learning how to program.”
—Gabor Szabo, founder and editor of the Perl Weekly newsletter

“I didn't find anything to yell about. Given how much of a perfectionist bastard I am this is likely high praise.”
—Matt Trout, technical director of Shadowcat Systems

“A set of exercises for deepening your understanding of Perl.”
—John D. Cook, Singular Value Consulting

“The author is enthusiastic about the material and uses an easy writing style. Highly recommended.”
—Thrig (Jeremy Mates), Internet plumber

“Handy for anyone who does a lot of one-off text processing: system administrators, coders, or anyone with large amounts of data they need shifted, filtered, or interpreted.”
—Jim Davis, Perl developer

“Any Perl programmers should take the time to get to know the command like switches that make this possible. This book is a pretty good introduction to this way of using Perl.”
—David Cross, Perl Hacker, Trainer and Author (Read More)

“Seriously, folks, CompSci 101 courses might be more fun with a book like this (instead of the standard C++ tome).”
—Thomas Maher (Read More)

“Perl One-liners is a beautifully written manual, if I can call it like that, that empowers sysadmins with a Swiss Army knife to get dirty jobs done.”
—Nitin K Sookun (Read More)

“By the end of the book one should master enough of Perl code to write beautiful scripts.”
—Ish Sookun (Read More)

“Author pulls out a lot of interesting Perl tricks that someone can learn from. The book is worth reading just for that; it's also a short easy read.”
—John Graham-Cumming (Read More)

“If you are doing the sort of thing Perl excels at, like text mangling, this will be a book full of tools for you.”
—Justin Sherrill, DragonFly BSD (Read More)

“The presentation style is great as all the one liners are explained and alternatives presented, in keeping with the Perl idiom "There is more than one way to do it".”
—Andrew Colin Kissa, Creator of Baruwa, Fedora Linux contributor (Read More)

“Summing up, this is a useful book for admins, shell users and coders alike who need their tools concentrated into one toolbox and not spread here and there. Having the book to hand will allow you to call on Perl's full power in an instant when the need arises. Recommended”
—Nikos Vaggalis (Read More)

I've made Chapters 1 and 4 freely available:

You can also view full index of the book and detailed table of contents.

Perl one-liners is available from No Starch Press (use discount code CATONMAT for 30% off), Amazon, Amazon Kindle, O'Reilly, Powell's and Barnes and Noble.

Help me spread the word about my new book! I prepared a special link that you can use to tweet about it:

I really love writing about programming and I'll soon publish several more books. The next few are going to be about becoming skillful in bash (you can already start reading it here!), about the most effective vim tricks, a practical guide on how to be anonymous on the web, and the catonmat book.

Read more articles →
Thanks for reading my post. If you enjoyed it and would like to receive my posts automatically, you can subscribe to new posts via rss feed or email.
How to make unprivileged programs listen on privileged ports
PerlTricks Interview With Me