Everyauth – A Node.js Module You Should Know About

Hello everyone! This is the 14th post in the node.js modules you should know about article series.

Today I'm gonna introduce you to everyauth by Brian Noguchi. Everyauth is a connect middleware that allows you to setup authentication for your app via facebook, twitter, google, vimeo, tumblr, 4square, etc.

Here is a list of all the sites you can use to login into your app: 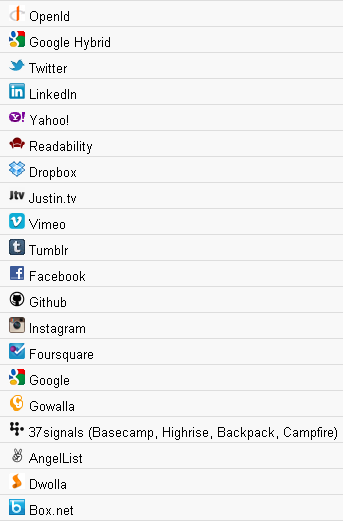 Everyauth supports a plenty of sites.

Using it is as simple as setting up a middleware for connect:

And setting up config.json that contains secret keys from the sites you are going to be using for authentication:

Then you setup routes for logging in for each particular site you want to support (in this example facebook) and you're done:

You can install everyauth through npm as always:

Read more articles →
Thanks for reading my post. If you enjoyed it and would like to receive my posts automatically, you can subscribe to new posts via rss feed or email.
How to setup Stripe payments with node.js
Browserling has a new design