How we fixed a nasty uncaught exception bug in Browserling yesterday

I thought I'd write this short article about how we fixed a nasty bug at Browserling together with my friend James Halliday yesterday.

Long story short we were testing Browserling in the latest FireFox and we got this nasty exception that said:

Here's how it looked in Firebug: 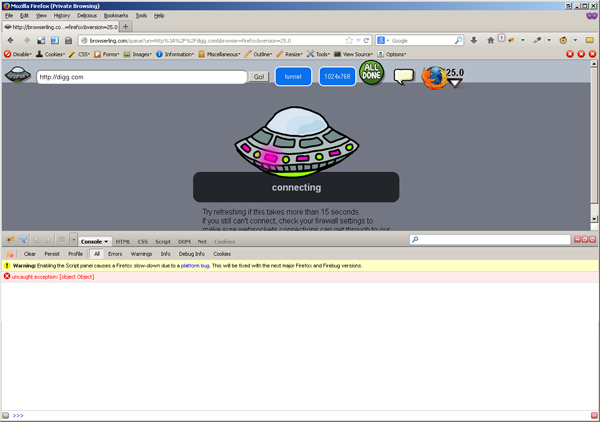 FireBug didn't show the line number where it was thrown from and we couldn't find a way how to make it show the stack trace. We tried stepping through the code and setting breakpoints at some potential locations but didn't get us anywhere.

We were stuck and annoyed.

So we came up with a very hacky Perl one-liner that appends a console.log to almost every function definition:

What this one-liner does is it finds all lines that have string function in them and that end with { and appends a console.log with the current line number to the beginning of the function.

For example, this code piece:

Our thinking was that we should get the line number of the last function call before the exception was thrown or some function call nearby.

We refreshed Browserling and we got an awesome trace with lots of line numbers followed by the same uncaught exception error:

Here's how it looked in FireBug: 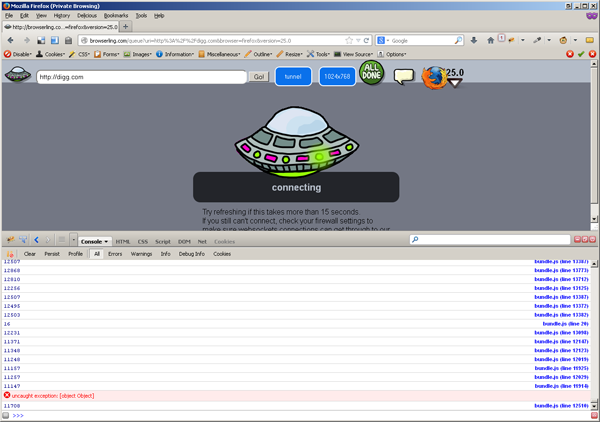 Next we checked the line 11147 in the original file (line 11914 in the updated file because the one-liner offsets line numbers) and we found the exception that we were looking for:

A fix quickly followed and we got Browserling working in the latest FireFox! Until next time.

Read more articles →
Thanks for reading my post. If you enjoyed it and would like to receive my posts automatically, you can subscribe to new posts via rss feed or email.
Browserling now has Internet Explorer 11
How we got rid of annoying browser dialogs in Browserling