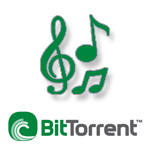 This week on Musical Geek Friday - the famous BitTorrent Song!

The song is written and performed by Brent Simon. Brent describes himself as a super nerd who plays the synth and makes original music that's honest and from the heart. He keeps composing and his latest music can be found on his MySpace page - brentsimon.

The song, when I first downloaded it, was actually called "Mininova", in honor of one of the largest BitTorrent sites on the net - Mininova.org.

I was curious about the history of this song and emailed Brent. It turns out the original title of the song is "World Wired West" and Mininova torrent renamed to song to "Mininova" when they put it for download on their site!

Here is what Brent had to say about the history of the song:

I decided to write "World Wired West", which has become better known as "the Bittorent song", based off of my experience with the net and torrents. I wanted to write something as geeky as possible and see if anyone knew what I was talking about. It looks like you guys do! The second verse is actually a short poem I wrote for the literary journal back in high school. I was transitioning from DOS to Windows at that point; that's why I have the old DOS references of "Bad command or file name" and D-I-R.

I also asked him about the mysterious final verse, he said:

I had just read Naked Lunch by William S. Burroughs, which was the most confusing and disturbing book I've ever read, and my cousin Jim wanted me to write a song about it. That verse is the combined total of what I could make out from the book and what I remember from the movie (which I haven't seen in many years). There was no way I could write a whole song about it, but I was able to fit a verse together and there you have it.

Here it is! The BitTorrent Song!

Here are the lyrics of The BitTorrent Song:

Read more articles →
Thanks for reading my post. If you enjoyed it and would like to receive my posts automatically, you can subscribe to new posts via rss feed or email.
Web Application Vulnerabilities (Google Tech Talk by Neil Daswani)
A Year of Blogging