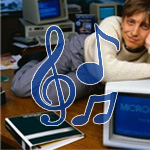 This week on Musical Geek Friday - The Bill Gates Song!

I found this song while watching a TED Talk on good vs. bad software interfaces called "When It Comes to Tech, Simplicity Sells" (scroll to the bottom to view this talk). To funny things up the speaker, David Pogue, bursted into a few songs, one of them being a song about Bill Gates.

David Pogue is the personal-technology columnist for the New York Times. Each week, he contributes a print column, an online column and an online video. His daily blog, "Pogue's Posts," is the Times's most popular blog.

So, here it is! The Bill Gates Song:

Here are the lyrics of The Bill Gates Song:

I've been a geek forever, And I wrote the very first DOS. I put my software and IBM together, I got profit, and they got the loss! I write the code that makes the whole world run, I'm gettin' royalties from everyone. Sometimes it's garbage, but the press is snowed, You buy the box, I sell the code. Every software company Is doing Microsoft's R&D. You can't keep a good idea down these days. Even Windows is a hack We kinda based loosely on the Mac. So it's big, so it's slow, You've got nowhere to go! I'm not doing it for praise! I write the code that fits the world today, Big mediocrity in every way. We've entered planet domination mode, You'll have no choice, you'll buy my code. I am Bill Gates, and I write the code!

Here is the TED Talk with the song. The talk includes another two songs about Steve Jobs and technical support nightmare.

Read more articles →
Thanks for reading my post. If you enjoyed it and would like to receive my posts automatically, you can subscribe to new posts via rss feed or email.
Just One More Hack – Musical Geek Friday 7
Solving Google Treasure Hunt Puzzle 4: Prime Numbers