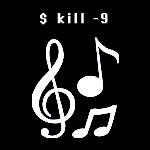 Musical Geek Friday is back! This week we have a geek song about the most cruel way to kill a process - killing it with kill -9!

Kill -9 song is written by Monzy. Monzy's real name is Dan Maynes-Aminzade and he is a Ph.D. student at Stanford. Here is an article on Wired about him.

In his songs, Monzy bashes another nerdcore hip-hop musician Mc Plus+. I actually published a geek song by Mc Plus+ on previous Musical Geek Friday - MGF #14: Alice and Bob.

Song's title has a lot of meaning. Kill -9 sends SIGKILL signal to a process. It's one of the signals that can't be caught. The process just gets killed.

Here it is! The kill dash nine song. The song is strongly NSFW as it contains some explicit language.

Here is Monzy performing the song at Stanford University.

Read more articles →
Thanks for reading my post. If you enjoyed it and would like to receive my posts automatically, you can subscribe to new posts via rss feed or email.
MIT's Introduction to Algorithms, Lectures 13 and 14: Amortized Analysis and Self-Organizing Lists
My Job Interview at Google