When traveling I just love to read news from my favorite social news site reddit.com. A few weeks ago I saw this 'Ask Reddit' post which asked if we could get a reddit version for mobile phones. Well, I thought, it's a cool project and I can do it quickly.

While scanning through the comments of 'Ask Reddit' post, I noticed davidlvann's comment where he said that Digg.com already had almost a plain text version of Digg, called DiggRiver.com.

It didn't take me long to do a

to find that the domain RedditRiver.com was not registered! What a great name for a project! I quickly mailed my friend Alexis [kn0thing] Ohanian at Reddit (check his alien blog) to ask a permission to do a Reddit River project. Sure enough, he registered the domain for me and I was free to make it happen!

I'll describe how I made the site, and I will release full source code.

Update: The project is now live!

My language of choice for this project is Python, the same language reddit.com is written in.

This is actually the first real project I am doing in Python (I'm a big Perl fan). I have a good overall understanding of Python but I have never done a project from the ground up! Before doing the project I watched a few Python video lectures and read a bunch of articles to get into a mindset of a Pythonista.

The main goal of the project was to create a very lightweight version of reddit, which would monitor for story changes (as they get up/down voted) on several pages across the most popular popular subreddits, and which would find mobile versions of stories posted (what I mean is rewrite URLs, say, a post to The Washington Post gets rewritten to the print version of the same article, or a link to youtube.com gets rewritten to the mobile version of yotube.com -- m.youtube.com, etc.).

The project was done in several separate steps.

Setting up the Web Server

This blog and picurls.com run on a dedicated linux server. I use lighttpd web server and PHP programming language for this project. To get RedditRiver running, I had to add Python support to the web server.

I decided to run web.py web framework to serve the HTML contents because of its simplicity and because Reddit guys used it themselves after rewriting Reddit from Lisp to Python.

Following the install instructions, getting web.py running on the server was as simple as installing the web.py package!

It was also just as easy to get lighttpd web server to communicate with web.py and my application. This required flup package to be installed to allow lighttpd to interface with web.py.

When I tested it out in interpreter,

it found #include's accross multiline text lines just fine, but it did not work with my template files. I tested it like 5 times and just couldn't get it why it was not working.

As RedditRiver is the only web.py application running on my server, I easily patched that regex on line 23 to something trivial and it all started working! I dropped all the negative lookahead magic and checking for end of the line:

As I said, I am not sure why the original regex did not work in the web.py application, but did work in the interpreter. If anyone knows what happened, I will be glad to hear from you!

I wrote several Python modules (which also work as executables) to access information on Reddit - stories across multiple pages of various subreddits (and front page) and user created subreddits.

As Reddit still does not provide an API to access the information on their site, I had to extract the relevant information from the HTML content of the pages.

The first module I wrote is called 'subreddits.py' which accesses http://reddit.com/reddits and returns (or prints out, if used as an executable) the list of the most popular subreddits (a subreddit is a reddit for a specific topic, for example, programming or politics)

Get this program here: catonmat.net/ftp/subreddits.py

The way this module works can be seen from the Python interpreter right away:

Or it can be called from the command line:

The second program I wrote is called 'redditstories.py' which accesses the specified subreddit and gets the latest stories from it. It was written pretty much the same way I did it for redditmedia project in Perl.

Get this program here: catonmat.net/ftp/redditstories.py

It can also be used as a Python module or executable.

Here is an example of using it as a module:

Using it from a command line:

These two programs just beg to be converted into a single Python module. They have the same logic with just a few changes in the parser. But for the moment I am generally happy, and they serve the job well. They can also be understood individually without having a need to inspect several source files.

I think that one of the future posts could be a reddit information accessing library in Python.

I can already think of one hundred ideas what someone can do with such a library. For example, one could print out top programming stories his or her shell:

Creating and Populating the SQLite Database

The database has a trivial structure with just two tables 'subreddits' and 'stories'.

The 'subreddits' table contains information extracted by 'subreddits.py' module (described earlier). It keeps the information and positions of all the subreddits which appeared on the most popular subreddit page (http://reddit.com/reddits).

Reddit lists 'reddit.com' as a separate subreddit on the most popular subreddit page, but it turned out that it was not the same as the front page of reddit! That's why I insert a fake subreddit called 'front_page' in the table right after creating it, to keep track of both 'reddit.com' subreddit and reddit's front page.

The information in the table is updated by a new program - update_subreddits.py.

The information in this table is updated by another new program - update_stories.py.

As it is impossible to keep track of all the scores and comments, and position changes across all the subreddits, the program monitors just a few pages on each of the most popular subreddits.

These two programs are run periodically by crontab (task scheduler in unix). The program update_subreddits.py gets run every 30 minutes and update_stories.py every 5 minutes.

Finding the Mobile Versions of Given Websites

This is probably the most interesting piece of software that I wrote for this project. The idea is to find versions of a website suitable for viewing on a mobile device.

For example, most of the stories on politics subreddit link to the largest online newspapers and news agencies, such as The Washington Post or MSNBC. These websites provide a 'print' version of the page which is ideally suitable for mobile devices.

Another example is websites who have designed a real mobile version of their page and let the user agent know about it by placing <link rel="alternate" media="handheld" href="..."> tag in the head section of an html document.

Here is an example run from Python interpreter of the module:

And it can also be used from command line:

This module actually uses a configuration file 'autodisc.conf' which defines patterns to look for in the web page's HTML code. At the moment the config file is pretty primitive and defines just three configuration options:

The final part to the project was creating the web.py application.

It was pretty straight forward to create it as it only required writing the correct SQL expressions for selecting the right data out of the database.

Here is how the controller for the web.py application looks like:

I have put it online! Click redditriver.com to visit the site.

I have also released the source code. Here are all the files mentioned in the article, and a link to the whole website package.

All the programs in a single .zip:

All these programs are released under GNU GPL license, so you may derive your own stuff, but do not forget to share your derivative work with everyone.

Alexis also recently sent me a reddit t-shirt for doing redditmedia project. Here's a photo of me wearing it. 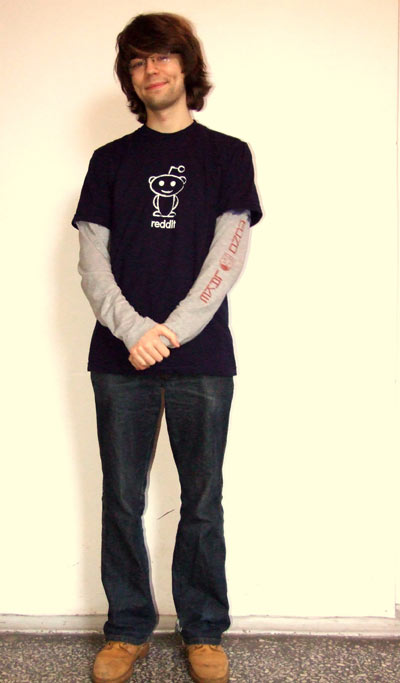 Read more articles →
Thanks for reading my post. If you enjoyed it and would like to receive my posts automatically, you can subscribe to new posts via rss feed or email.
Learning Python Programming Language Through Video Lectures
Crypto – Musical Geek Friday