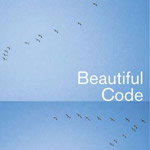 Have you heard about a book called Beautiful Code? This book is composed of 33 essays by well-known computer scientists and software engineers on the same question - "What is the most beautiful piece of code you know?"

Chapter 3 of this book is written by Jon Bentley. The chapter is curiously titled "The Most Beautiful Code I Never Wrote" and it talks about a beautiful implementation and experimental analysis of the most widely used sorting algorithm in the world called Quicksort.

What I learned the most from this lecture is the experimental part of counting number of comparsions of an algorithm. I had never read about experimental analysis of algorithms.

Interesting ideas from the lecture:

Here is a working C program which runs Quicksort algorithm (in bold) from the Chapter 3 of the book. The algorithm sorts the global array of integers x.

In a functional programming language, Quicksort can be written even more elegantly. Check out this Quicksort written in Haskell (thanks to bayareaguy.)

And what's the most beautiful code you've ever written?

Read more articles →
Thanks for reading my post. If you enjoyed it and would like to receive my posts automatically, you can subscribe to new posts via rss feed or email.
Follow Hacker News from the Terminal
Musical Geek Friday #10: TECO and DDT