Set Operations in the Unix Shell 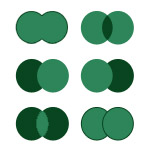 A while ago I wrote about how I solved the Google Treasure Hunt Puzzle #4 about prime numbers. I took an unusual approach and solved this problem entirely from the Unix shell. The solution involved finding the intersection between a bunch of files containing numbers. This lead me to an idea to write a post about how to do various set operations from the shell by using common utilities such as sort, uniq, diff, grep, head, tail, comm, and others.

I'll cover the following set operations in this article.

Update: I wrote another post about these operations and created a cheat sheet.

To illustrate these operations, I created a couple of random sets to work with. Each set is represented as a file with one element per line. The elements are positive numbers.

First, I created two sets A and B with 5 elements each so that I could easily check if the operations really worked.

Sets A and B are hand-crafted. It's easy to see that only elements 1, 2 and 3 are in common:

Next, I created two equal sets Aequal and Bequal again with 5 elements each:

Then, I created two huge sets Abig and Bbig with 100,000 elements with repeated elements.

The easiest way to generate sets Abig and Bbig was to take natural numbers from /dev/urandom. There are two shell commands that can easily do that. The first is od and the second is hexdump.

Here is how to create two files with 100,000 natural numbers with both commands.

The easiest way to test if an element is in a set is to use "grep" command. Grep searches the file for lines matching a pattern:

Here is an example of this operation run on set A:

That's correct. Set A contains element 4 but does not contain element 999.

If the membership operation has to be used from a shell script, the return code from grep can be used instead. Unix commands succeed if the return code is 0, and fail otherwise:

The "-q" flag makes sure that grep does not output the element if it is in the set.

The set equality operation tests if two sets are the same, i.e., contain the same elements. We write A = B if sets A and B are equal and A ? B if they are not.

The easiest way to test if two sets are equal is to use "diff" command. Diff command compares two files for differences. It will find that the order of lines differ, so the files have to be sorted first. If they are multi-sets, the output of sort has to be run through "uniq" command to eliminate duplicate elements:

The "-q" flag quiets the output of diff command.

Let's test this operation on sets A, B, Aequal and Bequal:

If you have already sorted sets, then just run:

The set cardinality operations returns the number of elements in the set. We write |A| to denote the cardinality of the set A.

The simplest way to count the number of elements in a set is to use "wc" command. Wc command counts the number of characters, words or lines in a file. Since each element in the set appears on a new line, counting the number of lines in the file will return the cardinality of the set:

Cut command is necessary because "wc -l" also outputs the name of the file it was ran on. The cut command outputs the first field which is number of lines in the file.

We can actually get rid of cut:

Let's test if on sets A and Abig:

I found a very easy way to do it using the "comm" utility. Comm compares two sorted files line by line. It may be run in such a way that it outputs lines that appear only in the first specified file. If the first file is subset of the second, then all the lines in the 1st file also appear in the 2nd, so no output is produced:

Please remember that if you have a numeric set, then sort must take "-n" option.

Let's test if Asub is a subset of A:

Now let's test if Anotsub is a subset of A:

If you want to use it from a shell script, you'd have to test if the output from this command was empty or not.

The set union operation unions two sets, i.e., join them into one set. We write C = A ? B to denote union of sets A and B which produces set C.

Set union is extremely easy to create. Just use the "cat" utility to concatenate two files:

If the duplicates (elements which are both in set1 and set2) are not welcome, then the output of cat can be filtered via awk:

If we don't want to use awk, which is a whole-blown programming language, then we can sort the output of cat and filter it via uniq:

If the sets set1 and set2 are already sorted, then the union operation can be made much faster by specifying the "-m" command line option, which merges the files (like the final step of merge-sort algorithm):

Let's test this operation on sets A and B:

The set intersection operation finds elements that are in both sets at the same time. We write C = A ? B to denote the intersection of sets A and B, which produces the set C.

There are many ways to do set intersection. The first way that I am going to show you uses "comm":

The "-12" option to comm directs it to suppress output of lines appearing just in the 1st and the 2nd file and makes it output lines appearing in both 1st and 2nd, which is the intersection of two sets.

Please remember that if you have a numeric set, then sort must take "-n" option.

Another way to do it is to use "grep" utility. I actually found about this method as I was writing this article:

The "-x" option forces grep to match the whole lines (no partial matches). The "-f set1" specifies the patterns to use for searching. The "-F" option makes grep interpret the given patterns literally (no regexes). It works by matching all lines of set1 in set2. The lines that appear just in set1 or just in set2 are never output.

The next way to find intersection is by using "sort" and "uniq":

The "-d" option to uniq forces it to print only the duplicate lines. Obviously, if a line appears in set1 and set2, after sorting there will be two consecutive equal lines in the output. The "uniq -d" command prints such repeated lines (but only 1 copy of it), thus it's the intersection operation.

Just a few minutes before publishing this article I found another way to do intersection with "join" command. Join command joins files on a common field:

Here is a test run:

The set complement operation finds elements that are in one set but not the other. We write A - B or A \ B to denote set's B complement in set A.

Comm has become a pretty useful command for operating on sets. It can be applied to implement set complement operation as well:

The "grep" command can also be used to implement this operation:

Notice that the order of sets has been reversed from that of comm. That's because we are searching those elements in set1, which are not in set2.

This is a pretty tricky command. Suppose that a line appears in set1 but does not appear in set2. Then it will be output just once and will not get removed by uniq. All other lines get removed.

Let's put these commands to test:

The operation can be implemented very easily with "comm" utility:

We can use mathematics and derive a few formulas involving previously used operations for symmetric difference: A ? B = (A - B) ? (B - A). Now we can use grep:

It's not easy to do that with simple Unix tools. I could not think of anything better than a silly Perl solution:

Can you think of a way to do it with Unix tools?

I can't think of a great solution. I have a very silly solution in bash:

Can you think of other solutions?

The disjoint set test operation finds if two sets are disjoint, i.e., they do not contain common elements.

Another way to test if two sets are disjoint is to use awk:

It works by counting seen elements in set1 and then set2. If any of the elements appear both in set1 and set2, seen count for that element would be 2 and awk would quit with exit code 1.

The empty set test tests if the set is empty, i.e., contains no elements. The empty set is usually written as Ø.

It's very easy to test if the set is empty. The cardinality of an empty set is 0:

Getting rid of cut:

The minimum element of a set can be found by first sorting it in ascending order and then taking the first element. The first element can be taken with "head" Unix command which outputs the first part of the file:

The "-1" option specifies to output the first line only.

If the set is already sorted, then it's even simpler:

Remember to use "sort -n" command if the set contains numeric data.

Example of running minimum operation on sets A and Abig:

The maximum element of a set can be found by first sorting it in ascending order and then taking the last element. The last element can be taken with "tail" Unix command which outputs the last part of the file:

The "-1" option specifies to output the last line only.

If the set is already sorted, then it's even simpler:

Remember to use "sort -n" command if the set contains numeric data.

Example of running maximum operation on sets A and Abig:

Have fun learning all this and see you next time!

Read more articles →
Thanks for reading my post. If you enjoyed it and would like to receive my posts automatically, you can subscribe to new posts via rss feed or email.
Stop sending me your job offers
MIT's Introduction to Algorithms, Lecture 12: Skip Lists