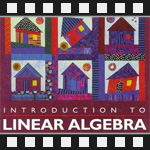 This is the second post in an article series about MIT's course Linear Algebra. In this post I will review lecture two on solving systems of linear equations by elimination and back-substitution. The other topics in the lecture are elimination matrices (also known as elementary matrices) and permutation matrices.

The first post covered the geometry of linear equations.

Okay, here is the second lecture.

Okay, here is a system of equations. Three equations in three unknowns.

For the elimination process we need the matrix A and the column vector b. The idea is very simple, first we write them down in the augmented matrix form A|b:

Next we subtract rows from one another in such a way that the final result is an upper triangular matrix (a matrix with all the elements below the diagonal being zero).

So the first step is to subtract the first row multiplied by 3 from the second row. This gives us the following matrix:

The next step is to subtract the second row multiplied by 2 from the third row. This is the final step and produces an upper triangular matrix that we needed:

Now let's write down the equations that resulted from the elimination:

The elimination would fail if taking a multiple of one row and adding to the next would produce a zero on the diagonal (and there would be no other row to try to exchange the failing row with).

Let's look at our first step of elimination again. It was to subtract 3 times the first row from the second row. This can be expressed as matrix multiplication (forget the column b for a while):

Let's call the matrix on the right E as elimination matrix (or elementary matrix), and give it subscript E21 for making a zero in the resulting matrix at row 2, column 1.

The next step was twice the second row minus the third row:

The matrix on the right is again an elimination matrix. Let's call it E32 for giving a zero at row 3, column 2.

But notice that these two operations can be combined:

And we can write E32(E21A) = U. Now remember that matrix operations are associative, therefore we can change the parenthesis (E32E21)A = U. If we multiply (E32E21) we get a single matrix E that we will call the elimination matrix. What we have done is expressed the whole elimination process in matrix language!

Watch the lecture to find the answer to these questions!

Here are my notes of lecture two: 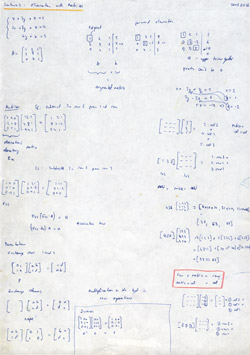 My notes of linear algebra lecture 2 on elimination with matrices.

The next post is going to be either on lectures three and four together or just lecture three. Lecture three will touch a bit more on matrix multiplication and then dive into the inverse matrices. Lecture four will cover A=LU matrix decomposition (also called factorization).

Read more articles →
Thanks for reading my post. If you enjoyed it and would like to receive my posts automatically, you can subscribe to new posts via rss feed or email.
Secret Perl Operators
I pushed 30 of my projects to GitHub