I decided I wanted to get better at JavaScript. I've been programming in it for a while but I never really developed any good skills in it. I was just mostly copy pasting examples together and adjusting code to get it working.

I recently found a bunch of really good programming video lectures on JavaScript and decided to watch them. These lectures are given by Douglas Crockford who is a senior JavaScript Architect at Yahoo. He is well known for his work in introducing JavaScript Object Notation (JSON).

First four lectures are on the basics of language:

Sometimes Yahoo Video gives this error: Sorry! This video is no longer available on Yahoo Video. In this case refresh your browser a couple of times!

The next three lectures are on Advanced JavaScript:

Then there are 6 more lectures on JavaScript which should probably be viewed only after you have viewed the ones just mentioned.

Viewing the YUI Theater I just found another JavaScript lecture which was published just recently:

My approach to watching video lectures

I have been watching various video lectures for almost 4 years now. Mostly mathematics, physics and theory of computer science. My approach to getting most of the lectures is the following. When I watch the video lectures I take notes just as if I were in class.

Even better, when I do not understand a part of the lecture I can always rewind it back and see that fragment again. I can also pause the lecture, think for a while and then continue.

Here is a photo of notes I too while watching MIT's 803 – Vibrations and Waves. 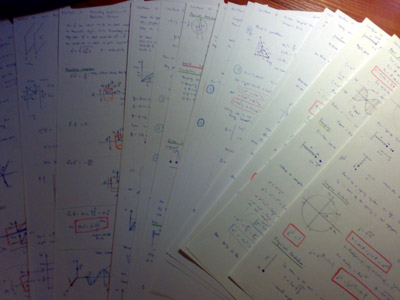 I am serious about physics and maths video lectures, as you can see in the image, all the main results are boxed in red, the results are fully derived (even if the professor does not do it on blackboard). Btw, one lecture perfectly fits on both sides of an A4 sheet. 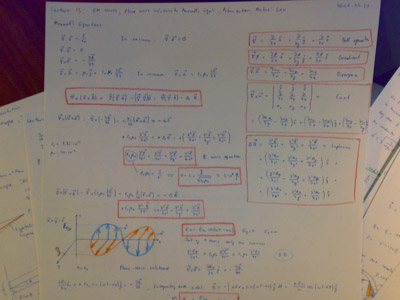 This approach probably does not work with programming languages and computer tools. Because mathematics and physics is mostly done on paper, watching these video lectures and taking notes is actually doing them. The process of taking notes develops the skills because you work with the new concepts, operators, theorems, and other math terms. Not so in programming languages. You can read a book on a new programming language and you won't even be able to write the hello world program because you have only got familiar with the subject and have not developed the skills. I have experienced this myself.

Here is my approach how I am going to learn JavaScript from these lectures. I might adjust this approach at any moment if I find it not working, I will update this post appropriately then.

I will definitely watch all 11 video lectures. I will start with the first four basic lectures, watch them one by one, take notes as with physics video lectures and experiment as I go.

I will be taking notes lightly to have my mind really think the information I am getting over. But no red boxes around constructs as with physics. That's the experimentation part to learning. I am going to try the new constructs as soon as I see them so they stuck in my mind better.

Update: I dropped the idea of taking any notes on paper, because I am blogging the key points from lectures here.

Also to make this article interesting, I will annotate each lecture if something really interesting catches my eye. As I mentioned, I have programmed JS before so I am not sure how much I will learn from the first four basic lectures.

In my previous blog post I used Windows Script Host to create a program in VBScript. The other language the same scripting host runs is JScript which conforms to the same standard as JavaScript. So I should be safe doing JavaScript experimentation in JScript.

Points that caught my attention in JavaScript Video Lecture Part I:

After having watched the first lecture I decided that there was no point in taking notes on paper because I am blogging the key points here and trying various examples I can come up with with JScript, taking notes just wastes time.

These four lectures gave me much better theoretical understanding of JavaScript but just a little better practical skills. I should do a project entirely in JavaScript to become more skillful.

I can't wait to see the Advanced JavaScript lectures. At the end of the 4th lecture Douglas said that they will continue with theory of DOM which I will follow and only then continue with Advanced JS.

Points that caught my attention in The Theory of the DOM Part I:

After watching this lecture I decided to add time where each point that caught my attention happened so that if anyone is interested in any of the points he/she could just fast forward to that place in the video. Eventually I will go through the videos up to this one once more and add timestamps.

Points that caught my attention in The Theory of the DOM Part II:

Points that caught my attention in The Theory of the DOM Part III:

Okay, I watched the whole Theory of DOM course and have gained good theoretical knowledge but basically no practical skills. To get better with the JavaScript and DOM will require me to do some interesting practical projects with both of these guys.

Now I am off to watch Advanced JavaScript lectures and then the remaining.

Points that caught my attention in Advanced JavaScript Part I:

Points that caught my attention in Advanced JavaScript Part II:

Points that caught my attention in Advanced JavaScript Part III:

The advanced JavaScript lectures provided lots of idioms and patterns used in the language. I did not do much experimentation and have really grasped just the concepts and overall structure of these advanced concepts.

Now I am going to watch "Advancing JavaScript with Libraries" by John Resig, creator of the jQuery JavaScript library and author of Pro JavaScript Techniques. He's a Mozilla technologist focused on the relationship between Mozilla and the world of JavaScript libraries.

Interesting points from Advancing JavaScript with Libraries Part I:

There were not that many points that got me interested because it was pretty obvious stuff. It was just interesting to see that the DOM is not perfect and there are many bugs which one or the other browser fails, why they fail and how to solve these DOM related problems. Also typical programming meta-problems were discussed such as JavaScript trying to get elements before browser has loaded the DOM, how the white spaces are treated and what methods to use for navigating the DOM. Later the lecture went on how to query the DOM tree using jQuery and mix of XPath and CSS 3. Then it is discussed how injecting HTML in an existing document is done, what's tricky about it and what problems can arise. Finally the lecture continues with FUEL and object relational mappings.

The other lecture I watched was "Maintainable JavaScript" by Nicholas Zakas. He is an engineer on the team that brings you My Yahoo!, one of the most popular personalized portals on the web. He is also the author of two books on frontend engineering, including Professional JavaScript for Web Developers, one of the best tomes of its kind.

There are not that many interesting points anymore because most of the stuff has been covered in the previous lectures. Apart from that these lecture did not teach me much new because this stuff was pretty obvious. The only point to watch this lecture is to refresh all these obvious suggestions - agree on indentation and naming conventions in your team, comment difficult algorithms and large sections of code, don't write obvious comments, comment hacks, loose coupling, careful use of complex code and design patterns, etc.

Read more articles →
Thanks for reading my post. If you enjoyed it and would like to receive my posts automatically, you can subscribe to new posts via rss feed or email.
Writing a YouTube Video Downloader in VBScript
Perl pack/unpack and printf Cheat Sheet