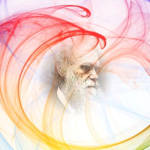 I'm currently messing with genetic algorithms. They are super fun and can be used to find optimal solutions to various physics problems and optimization problems in general. One of the problems I'm solving is simulating equilibrium configurations of two dimensional dipole systems of particles, which can attract and repel. This problem is NP hard, which means there is no effective algorithm to find the exact solution in an adequate time. A couple of algorithms can be used to approximate the solution and find near-equilibrium configurations, one of them being genetic algorithms.

The easiest situation is when the particles are bounded by a circle, which border they can't trespass. The goal is to find how these particles will position themselves inside this circle.

This case has already been solved using the simulated annealing method and near-optimal solutions for hundreds of particles have been found. This method uses different principles than genetic algorithm method, which I will describe shortly. The main idea of simulated annealing method is that the system is given an initial temperature which basically controls how much the particles will fluctuate inside the system. The greater the temperature, the bigger the fluctuations. The temperature gradually gets decreased and the fluctuations get smaller and smaller. Calculating the energy of the system and requiring it to be minimal at each step the temperature gets decreased eventually leads to a solution.

Notice how the particles position themselves in a case when another particle gets added to a system of 12 particles. Instead of positioning the new particle somewhere in the middle as in transition from 11 particles to 12, the system decides to put it on the border.

Here is a general description of what genetic algorithms are.

One of the ways to implement this idea in computer programs is to represent individuals as strings of binary digits. Each bit in the string represents one gene. Each individual is assigned a numerical evaluation of its merit by a fitness function. The fitness function determines how each gene of an individual will be interpreted and, thus, what specific problem the population will evolve to solve.

Here is an illustration of how a genetic algorithm might work:

Read more articles →
Thanks for reading my post. If you enjoyed it and would like to receive my posts automatically, you can subscribe to new posts via rss feed or email.
Bash Emacs Editing Mode Cheat Sheet
Wordpress Default Password Vulnerability