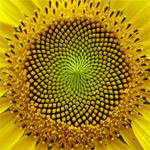 And you're done converting. No kidding – there are 8 kilometers in 5 miles. To convert back just read the result from the other end – there are 5 miles in 8 km!

Let's take two consecutive Fibonacci numbers 21 and 34. What this tells us is that there are approximately 34 km in 21 miles and vice versa. (The exact answer is 33.79 km.)

For example, how many kilometers are there in 100 miles?

Another example, how many miles are there in 400 km?

If the distance you're converting can be expressed as a single Fibonacci number, then for numbers greater than 21 the error is always around 0.5%.

If the distance needs to be composed as a sum of n Fibonacci numbers, then the error will be around sqrt(n)·0.5%.

Here's why it works.

Fibonacci numbers have a property that the ratio of two consecutive numbers approaches the Golden ratio as numbers get bigger and bigger. The Golden ratio is a constant that happens to be approximately 1.618.

Coincidentally, there are 1.609 kilometers in a mile, which is within 0.5% of the Golden ratio.

That's all there is to it. A pure coincidence that the Golden ratio is almost the same as kilometers in a mile.

Read more articles →
Thanks for reading my post. If you enjoyed it and would like to receive my posts automatically, you can subscribe to new posts via rss feed or email.
Perl One-Liners Explained, Part IV: String and Array Creation
Nerdtree.vim – A Vim Plugin You Should Know About