Yesterday I was interviewed on Coder Intros. This is a copy of the interview. Coder Intros showcases coders as awesome yet real and flawed human beings, so that others can become interested and invested in coding. 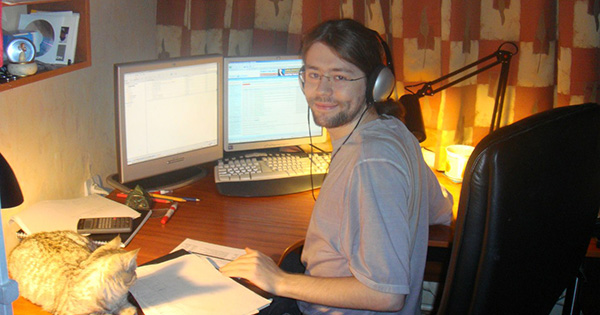 a wild pkrumins in its natural habitat.

What is your coding specialty?

I have many, and Linux system programming is one of them.

Who is your current employer?

I'm my own employer. I'm the CEO of my own company, Browserling, a cross-browser testing company.

What is your earliest coding memory?

Writing tiny applications in Visual Basic when I was like 10 years old. They were very simple, like adding two numbers together or converting text to ascii.

Did you go to school for computer science?

No. I didn't go to college for computer science. College is the stupidest place you can go to for any kind of education. Completely outdated concept in the modern world.

What was your process like of learning to code?

I started using computers when I was 6 years old. I would go to my mom's work and use the computers there. I loved everything about them. I got hooked and I just kept learning more and more about them.

What percentage of you is motivated by money?

100%. All my projects need an ever increasing funding. I'm not stopping until my personal wealth is in 10 or 11 digits.

At what age did you realize that you could make money from coding?

At the age of 12 I was creating websites for people. I charged like $10 an hour or maybe $10 per website.

If you had unlimited time, resources and knowledge what would you create?

I would have a team of scientists study time on a quantum scale. I would want to figure out answers to the questions: what is time? can we stop it? can we reverse it?

Then I would have that same team see if we can extract one bit of information from the future. I read an article about some crazy stuff where at a quantum scale that is possible. So why not study it? It would be the most powerful discovery. A single bit from the future is all you need.

I would also want to team up with Musk and help people, including myself, go to Mars and to other planets. Oh and next I would want to study reverse aging and longevity. I would give Aubrey de Grey billions of dollars to build a team that would stop aging and reverse it.

Oh and also creating a superhuman race. And more, like creating super dense pills filled with nutrients that you swallow and that dissolves throughout the day slowly so you don't have to waste time eating. I hate eating.

If you couldn't live in the US, what country would you live in?

I don't know. I don't like to go anywhere.

What state would you want to live in?

Only California so I could network and hang out with my Hackers & Founders friends. They have a huge network.

How did you get started with Hackers & Founders?

I went to a Hackers & Founders event where I ran into Jonathan Nelson, the founder. It just so happened that he had been reading my blog and the rest is history.

Do you still write on your blog? Why did you start it?

Yes, I still work on my blog. I started it because I had so much knowledge and I wanted to share it with the world.

What is your natural sleep cycle?

What languages do you use?

What advice would you give to someone who wants to get into coding?

Start with interactive tutorials like the ones from Code Academy. Don't read books, do the interactive tutorials. Reading a book from cover to cover will not make you a programmer. You'll be a smartass theoretician and won't be able to write a single line of code. If you do the interactive stuff you will really learn how to apply what you just learned. Once you've 5 years of coding behind your belt read a book or two to learn some theory but not too much. Theory is hacker's worst enemy.

Do you think everyone has the ability to learn to code?

Yes, but to get really good you have to start at a really young age. The skills you learn at an early age become second nature. At a later age it's much harder. I mean you can learn to code but you'll never have the same mental agility nor general computer aptitude if you learn at age 20 or 30 compared to someone who started at 10.

If you could describe yourself in three words what would they be?

What is your primary value?

My integrity is my primary value. I deliver what I say I will deliver. If I make a promise to you, I will fulfill that promise.

Has your hair always been as fantastic as it is currently?

Want to be interviewed?

If you want to be interviewed or know any great software developers, fill this form to get them interviewed.

Read more articles →
Thanks for reading my post. If you enjoyed it and would like to receive my posts automatically, you can subscribe to new posts via rss feed or email.
Browserling is now a top 50k website in the world
My Favorite 100 Programming, Computer and Science Books: Part Seven