This is the third post in an article series about Python video lectures. The previous two posts covered learning basics of Python and learning Python design patterns.

This video lecture is given by Google's "Über Tech Lead" Alex Martelli. In this video he talks about the most important language changes in each of the Python versions 2.2, 2.3, 2.4 and 2.5.

Here is the timeline of Python versions. I hope Alex doesn't mind that I took it from his presentation. :) 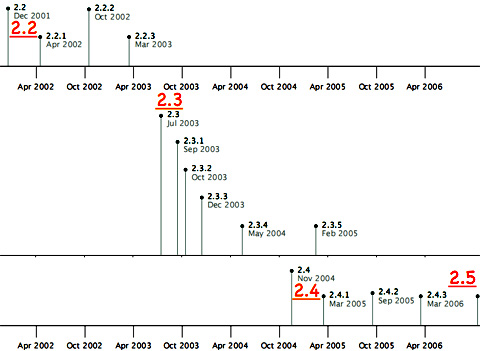 If you don't know what new-style objects are about, see these two tutorials:

Read more articles →
Thanks for reading my post. If you enjoyed it and would like to receive my posts automatically, you can subscribe to new posts via rss feed or email.
Musical Geek Friday #12: Every OS Sucks
Traffic Accounting with Linux IPTables